A unique landscape of moorland, woodland, valleys and farmland, shaped by people and nature over thousands of years.  Where high cliffs plunge into the Bristol Channel, and cosy pubs and tearooms offer delicious local produce.

On Exmoor it is still possible to find tranquillity and peace as well as rediscover your sense of adventure; to catch a glimpse of wild red deer, be amazed by dark skies full of stars, and explore villages full of character. 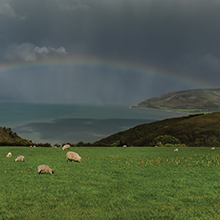 Within its 267 square miles Exmoor National Park contains an amazing variety of landscapes that provide inspiration and enjoyment to visitors and residents alike. Large areas of open moorland provide a sense of remoteness, wildness and tranquillity rare in southern Britain, while spectacular coastal views, deep wooded valleys, high sea cliffs and fast flowing streams all combine to form a rich and distinct mosaic. 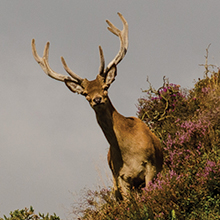 A wealth of wildlife.

The moorland, woodland, streams and farmland of Exmoor support a great diversity of wildlife including herds of wild red deer, rich lichen communities, rare butterflies, bats, and other species uncommon in southern Britain. Salmon still return from years at sea to travel up rivers such as the Exe and Barle to the same spawning grounds they hatched from. 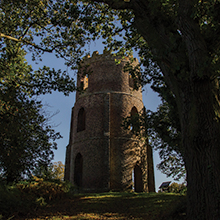 The landscape of Exmoor tells the story of how people have lived in, exploited and enjoyed Exmoor over the last 8000 years. Burial mounds on high ridges, unique and ancient patterns of standing stones, cliff top Roman forts, astonishingly preserved medieval villages and incredible Victorian industrial engineering are all there to
be explored.

Exmoor Wild Watch is an opportunity for you to join us in finding out more about some of the species that are particularly characteristic of Exmoor.

Churches form a large part of the architectural heritage of Exmoor. Ten out of the twenty Grade 1 Listed buildings on Exmoor are churches

Many of the trees found within Exmoor National Park are of national, or even international, importance and are undoubtedly a vital part of what makes Exmoor special.