Exmoor National Park was designated in  recognition of the outstanding beauty, wildness and tranquillity of the moorlands, which dominate its landscape. The moors and heaths are at the heart of the National Park; wide open areas, overlooking the whole of West Somerset, North Devon and the Bristol Channel coast.   While they appear to be wild untamed landscapes, they are in fact the result of centuries of swaling and grazing of livestock.

Moorland is the name given to areas of ‘semi-natural’ habitat usually dominated by short shrubs such as Bell Heather, Ling and Gorse or various rough grasses and sedges. While widespread worldwide, they are fast disappearing especially in Europe.

On Exmoor Moorlands include upland, dry heath type habitats as well as the often wetter mires.

Moorland or heath landscape accounts for a quarter of the area of Exmoor National Park, 18,300 hectares of land lying between 305 m (1000 ft) and 519 m (1700 ft) above sea level. The central moorland lies largely within the parish of Exmoor, the former Royal Hunting Forest area, protected from Norman times until the 19th century. This is surrounded by a fringe of commons and coastal heaths each linked historically to the villages surrounding the moor.

A brief history of moorland on Exmoor

10,000 years ago – Exmoor became covered in trees with the end of the ice age

4000 years ago – Bronze Age. As areas got cleared for hunting and animal rearing, burning was used for agriculture. It is not clear how much deforestation was caused by climatic changes and how much by human activity.

800 years ago – swaling is recorded in Britain in the 14th C. Recent sampling on Exmoor suggests burning in a controlled manner dates at least this far back. At this time there was also periodic cultivation on the Southern Commons.

200 – 40 years ago – ploughing and drainage of moorland increased dramatically. Large areas of moorland were ploughed under to make pasture after WW2; approximately 16% of the 1947 total. This resulted in the Porchester Report of 1977 and the beginnings of moorland being recognised as an important resource.

30 years ago – Heather & Grass Burning Regulations define the lawful period and the requirement of neighbour notification.

From a historic perspective the relatively low levels of ploughing over the moorlands has resulted in the survival of archaeological monuments from the earliest prehistoric periods. These form a rare and nationally significant resource. They include; Neolithic/early Bronze Age standing stones and stone settings, Bronze Age settlements (hut circles and enclosures), field systems, barrow groups and Iron Age hillforts and enclosures. More recently medieval farming has shaped the moorlands and there are many sites which illuminate the farming practices and economies at that time. More recently still the Parliamentary Inclosures and the Reclamation of The Royal Forest of Exmoor from the mid 19th century led to landscape scale changes. The last 200 years have seen a major reduction of the moorland area, as the heaths and bogs were converted to more agriculturally productive grassland and forestry.

How do Exmoor's moorlands differ from other UK moors?

The climate on Exmoor is a lot milder and wetter than other moorland areas of Britain, giving it a longer growing season. Free draining mineral soils are more extensive than on other upland areas, with little deposition of peat compared to places like the Peak District. Exmoor has a much greater proportion of well-drained mineral soils (85%) than any other upland area of England and Wales.

The northern moors of Britain are actively managed for grouse shooting, while Exmoor’s moorland is purely there for farming. Traditionally stock is put out on the moorland during the summer, so the in bye land can be rested, or produce winter feed.

Grouse moors are burnt in long, narrow strips no more than 30 metres wide. The aim is to get short and tall heather close to each other, which the grouse needs to thrive. To get maximum grouse numbers, the pattern of tall and short needs to be repeated on as small a scale as possible. This makes for very labour (and time) intensive work.

On Exmoor, the aim is to keep the moorland producing suitable rough grazing for livestock. This means there are less resources available, so burns will be of a larger size.

Apart from the central grass moors, these areas are primarily a mix of heather, gorse and grass on top of thin, well drained soil. Coastal heath is an especially rare habitat, as it has a subtle interaction with the shape of the land and salt spray along the coast.

The central grass moors are almost completely dominated by purple moor grass. This is where most of the peat and blanket bogs are to be found. Extensive restoration has been on-going by the Exmoor Mire Project to block up drainage ditches and re-wet the landscape.

Here are some upcoming events that have a moorland theme or take place on moorland. Or you can browse all events here 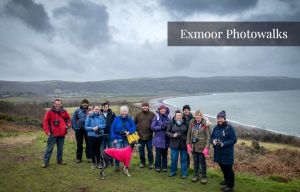 Several across Exmoor
11th Feb 2023 12:00 am
Discover the beauties Exmoor has to offer with your smartphone or camera, learni...
Read more