Over the hills, the relaunch of the Two Moors Way 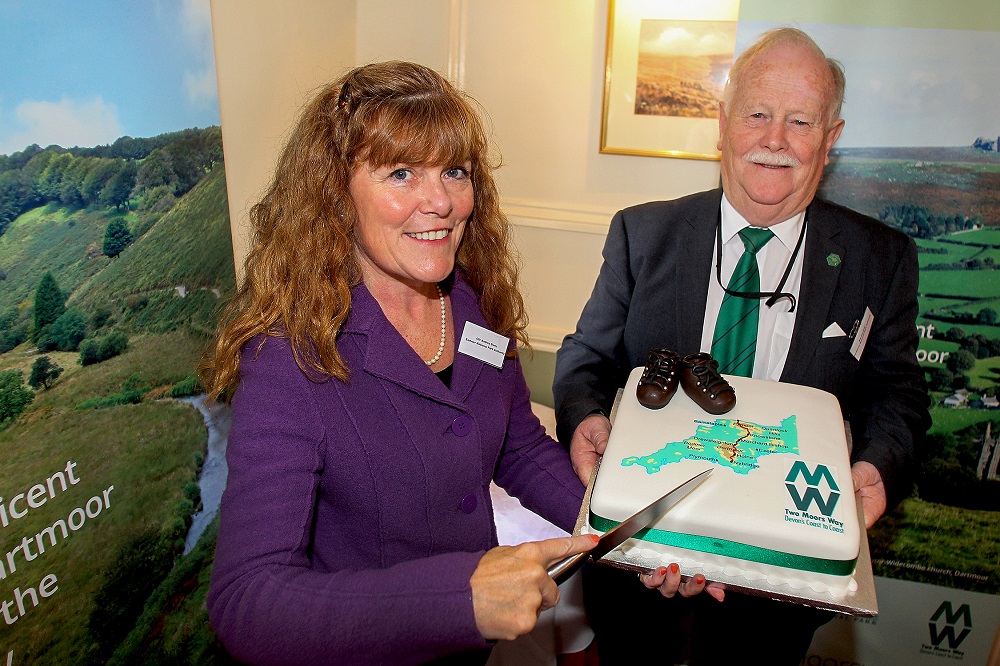 The Two Moors Way, one of the region’s most popular walking routes, was re-launched as part of its 40th anniversary year at a celebration event at Simonsbath on Exmoor yesterday (Thursday 22 September 2016).

The Two Moors Way was first established in 1976 linking the two National Parks in the South West via a 102-mile walking route between Ivybridge on the southern border of Dartmoor with Lynmouth on the rugged north coast of Exmoor. There is also a popular option to extend the route 15 miles between Wembury on the south Devon coast and Ivybridge to form a Devon Coast to Coast route utilising the Erme-Plym trail.

A series of initiatives have been worked on to celebrate the 40th anniversary through a partnership between Dartmoor and Exmoor National Parks, Devon County Council and other interested bodies. This work has included the re-establishment of the Two Moors Way Association to provide support and promotion of the route, numerous trial improvements, and the launch of a new pocket guide and website – www.twomoorsway.org.

Further improvement works planned include a major restoration, following an airdrop of stone, of one of Exmoor’s most remote sections at Long Chains Combe, and further work including signage and surface improvements at Colebrooke, Hittisleigh and Cheriton Bishop.

The new website and pocket guide were launched at the celebration event, aiming to provide inspiration and information for those considering walking the route. Pocket guides will be available at local visitor centres along the route and will be distributed widely to attract new visitors to the area. The website features full route descriptions, sleeping and eating listings and a whole host of practical information along with inspirational photography and a section for users to share their experiences.

New web films, a visitor passport scheme and business engagement workshops will follow in the coming months alongside support and training for volunteers to help maintain the route into the future.

Dan James, Sustainable Economy Manager at Exmoor National Park, said: “The Two Moors Way incorporates two coasts, two National Parks and over 100 miles of breath-taking scenery. At 40 years old the route was beginning to look a bit tired and most of the information available had become quite dated. It has been a great opportunity to bring different partners together to give the route a welcome boost. It’s hard to know exactly how many people walk the route, but conservative estimates suggest thousands of people complete the full walk each year, with many more using it for day walks, all contributing to the economy of some of the area’s most rural communities.”

Richard Drysdale, Visitor Services Manager at Dartmoor National Park commented: “Walking is one of the most popular activities undertaken by visitors to the area and many enjoy the challenge of a multiday route. Forty years on the Two Moors Way still manages to provide one of the most diverse walks you could wish for and we hope the new resources available from this project will inspire even more people to give the route a go – whether walking it in a one go over several days or enjoying short sections throughout the year.”

Councillor Stuart Hughes, Devon County Council’s Cabinet Member for Highways with responsibility for walking networks, said: “The Two Moors Way is a vital part of Devon County Council’s strategic long-distance walking network. It is the only route that connects Devon’s north and south coasts. Each year it is walked by thousands of people, many on trekking holidays, providing an economic boost to rural communities between the moors which are less visited than other parts of the county.”

John Howell, Chairman of the re-established Two Moors Way Association, concludes: “We were delighted when we heard about the possibility of a project to reinvigorate the route. The route was initially founded by the late Joe Turner who sadly died in 2004 and from its inception has been supported by the Ramblers. We are grateful to have had the opportunity to work alongside other project partners and I’m really pleased that the Association has been re-established enabling us to provide a one -stop shop for those people interested in walking the route, in addition to supporting the public bodies to maintain the route and its promotion as public funding comes under ever-increasing pressures.”

The first phase of the project has seen investments of over £40,000 funded primarily by Dartmoor and Exmoor National Park Authorities, with contributions from the Two Moors Way Association and Devon County Council via its Countryside Team and local Councillor grants, in addition to in-kind work conducted by the Rights of Way team at Devon County Council and the National Parks. Further funding has been secured from the Awards for All lottery programme to assist with the forthcoming web videos alongside volunteer support, and heritage interpretation.

Images available from the gallery on www.twomoorsway.org