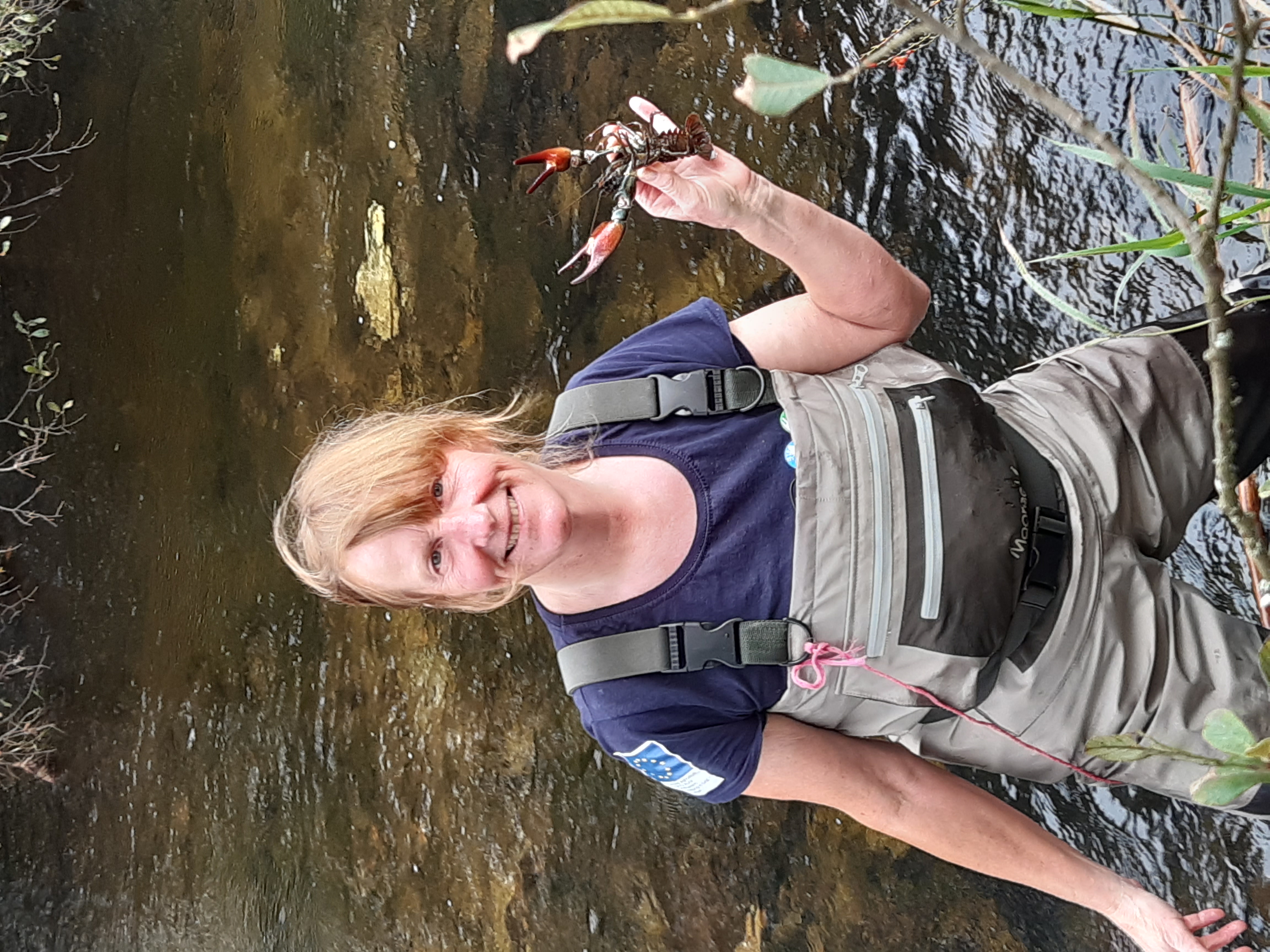 Electrocution of plants and sterilisation of male signal crayfish are two ground-breaking techniques showing early promise in Exmoor National Park as part of a three-year programme due to end next spring. Initial findings from the Exmoor Non-Native Invasive Species (ENNIS) project will be presented at a free online event on Thursday 9th December from 7-8pm, during which a new short film about the project will be screened.

Funding for the three-year ENNIS project started in 2019 and comes from the EU Agricultural Fund for Rural Development, aimed at strengthening the EU’s agriculture, agro-food and forestry sectors, as well as rural areas in general. The project has supported some of the UK’s first trials of state-of-the-art Rootwave Pro technology to take place on Exmoor, using electricity to zap the roots of problem plants thus avoiding the need for chemical herbicides.

Holly Moser, the National Park Authority’s ENNIS project officer, commented: “The good thing about Rootwave is you’re not putting chemicals into the environment which means that it’s a potential solution for organic farmers.”

The approach is being tested alongside an equally innovative first-in-UK trial sterilising and returning male signal crayfish, combined with removal using a specialised ‘Artificial Refuge Trap’, which mimics the crayfish’s natural home and has a number of advantages over conventional baited traps.

With the help of volunteers, this has so far resulted in 25,000 individuals being caught since the trial began in 2015, including 4000 males returned following sterilisation, with catch rates decreasing since 2017. The work forms part of ongoing PhD research in collaboration with the University of Bournemouth and Centre for Environment Fisheries and Aquaculture Science (Cefas).

Crayfish researcher Nicky Green (pictured above) says trials in the River Barle are showing early promise. She said: “Over the last six years the average size of the crayfish has actually increased quite a lot. So that tells us that we’re catching a lot of the smaller animals, the juveniles, which is what we are aiming to do. Although it’s good news it is not clear whether these changes are due to the sterilisation or the trapping, so work is needed to confirm this”.

The ENNIS project builds on decades of work to limit the spread of Japanese and Himalayan knotweed in the National Park, with an area the size of six Wembley football pitches now under control thanks to ongoing collaboration between the National Park Authority, the Environment Agency, Natural England and the National Trust, alongside support from landowners.

Chris Pedlar, an ENNIS steering group member from the Environment Agency, said: “In Lynmouth 25 years ago, which is roughly when we started treating knotweed here, everything out of the water was 6-foot high, wall-to-wall knotweed. We’re in a situation now where we’ve got native species back. It’s actually very difficult to find the knotweed now. It’s a success but we’ve still got more work to do.”

Around 10-12 new non-native species are established every year in Britain, according to the GB Invasive Species Strategy, with 12 per cent going on to cause serious adverse impacts, particularly on native woodlands and freshwater habitats like those abundant on Exmoor. It is one of five major threats identified in the latest 2019 State of Nature report, with concern that climate change will fuel the problem.

The list of invasive species threatening Exmoor’s fragile ecosystems grows, with species such as Japanese and Himalayan knotweed, montbretia, skunk cabbage and signal crayfish among those now requiring ongoing management. This makes it a race against time to secure further funding for this vital control work to continue on Exmoor, and to minimise the costs of ongoing management, estimated to cost the British economy £1.8 billion a year nationally.

Ali Hawkins, Exmoor National Park Authority Wildlife Conservation Officer, who is overseeing the project, said: “I think the legacy of the project is a really positive one. Thanks to this funding we now own our own Rootwave machine and have a growing body of evidence to share with others about the practicalities of this promising technology. We are also seeing fantastic results from our crayfish studies that will ultimately feed into control projects worldwide.

“Of course, none of this would be possible without our amazing volunteers, who have collectively donated nearly 3,000 hours of their time to the project, alongside invaluable support we have received from over 300 landowners and homeowners. With more funding we would love to continue the work, but we are very grateful to have had this opportunity to focus on invasives and make a real difference working with a really fantastic team.”

Find out more about the ENNIS project, watch the film trailer and sign up to the free online event at: www.exmoor-nationalpark.gov.uk/naturerecovery.