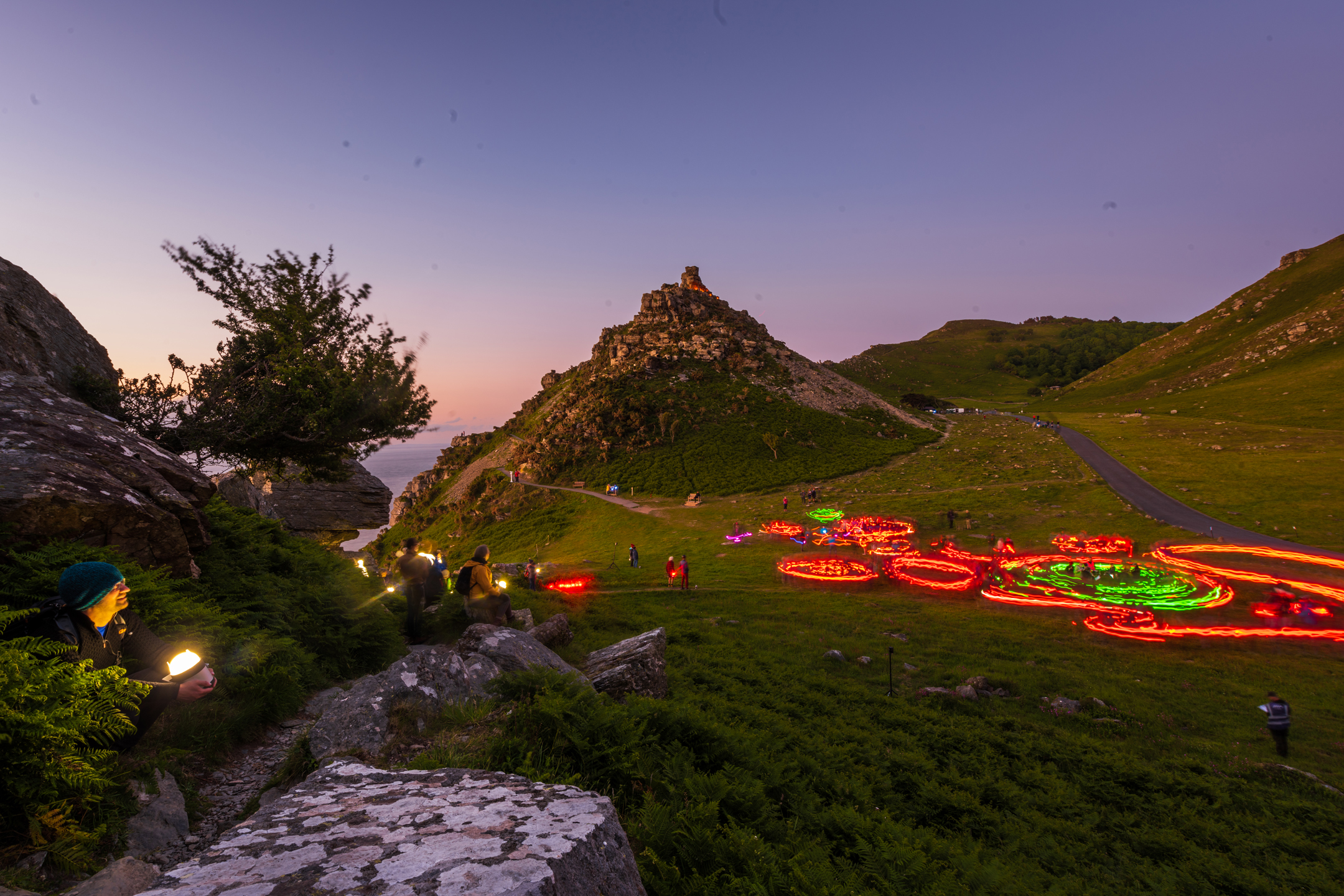 Gathering at dusk on Saturday 28 May, hundreds of 'Lumenators' from all walks of life came together at the Valley of Rocks in Exmoor National Park to create a stunning mass participation artwork for Green Space Dark Skies.

The Lumenators recreated the absent river flowing through the valley with music playing as they moved past Rugged Jack ridge. Castle Rock was illuminated as abseilers cascaded down the three tiers while local folk dancers and musicians performed below. At the end of the gathering, everything stopped for a moment as the lights went out allowing everyone to experience the wonder of a designated Dark Skies environment; from the darkness came a voice speaking an excerpt of poetry by William Wordsworth.

Carrying a Geolight specially developed by Siemens to minimise its impact on wildlife and dark skies, Lumenators helped to celebrate nature and everyone’s right to explore the countryside. The Geolights have built-in GPS technology that enables the creation of patterns in the landscape. The event was captured on film and a specially created short film will be available to view for free on the Green Space Dark Skies website.

Claire from Torquay participated as a Lumenator in the gathering. She said: “I enjoyed the scenery. The crew were amazing. The people participating are amazing. I've made some really good friends. The lights were spectacular. The energy was fabulous. I think what was so special was the fact that the landscape was so open and there was so much movement in every single part of this landscape, the landscape itself looks as if it was built by giants. And then just having all of the lights up in the tops of the hills and in the crevices and everyone moving in all different directions with the lights was just so magical. This gathering heightened what the possibilities are within the landscape and what we can achieve when we all come together in a unified fashion. It was fantastic.”

Sarah Bryan, Chief Executive of Exmoor National Park, said: “Exmoor was Europe’s first International Dark Sky Reserve and we were delighted when Green Space Dark Skies chose to host an event here and help raise awareness of the importance of access to green space, and how precious and rare our dark sky places have become. Dark skies aren’t just something to be enjoyed by astronomers – we want everyone to experience and value them for their beauty and importance to wildlife and human health. By day or by night, we believe passionately that everyone should feel welcome and able to enjoy Exmoor’s green spaces, and in turn be inspired to help look after them for future generations.”

Everyone is invited to join in the project by sharing their own connections to the landscape and the local areas through Green Space Stories, a free online story archive. This and the short films will form a valuable legacy of the project, accessible to anyone interested in our relationship with nature and the landscape.