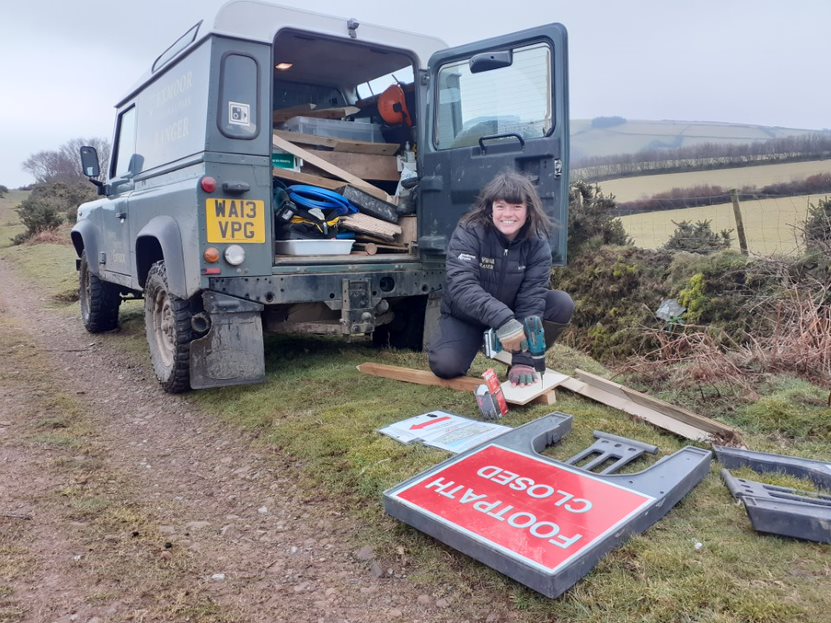 National Park rangers were forced to close and divert more than 20 paths across the National Park, including a long stretch of more than 5-miles of the iconic South West Coast Path, after the February storms left long sections treacherous and impassable. They rallied together with local landowners, contractors, communities and the National Trust, who own large stretches of the coast, to undertake a massive clear up operation.

Some of the most challenging work involved a remote 3-mile section between Culbone Church, near Porlock, and Desolate, near Lynmouth. This included deploying mini-diggers along narrow stretches of high coastal woodland, after lifting root balls and fallen trees tore out sections of the path.

The South West Coast Path Association has responded by launching a special appeal to help cover the cost of the damage, estimated at between £15,000 and £25,000.

Sue Applegate, Exmoor National Park Rights of Way Officer, said: “I’m sure many walkers will be delighted by news that the coast path is fully reopen in time for the bank holiday weekend, with the Exmoor section famous for its high sea cliffs, rare Atlantic rainforest and spectacular coastal views.

“After the storms there were trees down everywhere; including multiple larger ones snapped off at the base and left hanging dangerously. Getting those paths closed and diverted quickly was a matter of public safety. We saw treble the amount of path closures we would expect for that time of year and are extremely grateful to local landowners and walkers, whose cooperation and input has been crucial in getting paths reopened. Also to everyone who has so far donated towards this unforeseen cost.”

The Exmoor coast largely took the brunt of February’s storms, with the Met Office issuing a rare red weather warning for the area that saw winds gusting over 81mph and many moorland villages left without power for several days. Unsurprisingly this led to extensive damage across Exmoor’s rights of way network, with a total of 485 trees logged as blocking paths especially along the coast.

Dan James, Rural Enterprise Manager, commented: “Walking for pleasure has seen a huge surge in popularity since the pandemic, with our most recent visitor survey showing that twice as many people are coming to Exmoor for longer walks of more than two hours. The benefits of walking in nature can’t be underestimated and we’re proud of the vital role our rights of way network plays in supporting people’s mental health and wellbeing.”