If you visit Exmoor, please remember that social distancing measures continue to apply - please observe these at all times for your safety and the safety of communities, businesses and staff working in the National Park.

You may find our Plan Your Visit Page helpful. 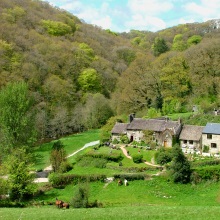 Whether you are an experienced walker or someone who prefers a short stroll, Tarr Steps is a great place to go when looking to explore Exmoor National Park. You can head straight there, utilising the on site car park and toilet facilities, with just a gentle walk down to the ancient clapper bridge. The beautiful wooded valley of the River Barle is also worth exploring for its wildlife, as is the heathland of Winsford Hill and its wild ponies in the surrounding countryside. For a short circular walk from the bridge just follow the orange way marks. There is also a more challenging circular walk from Dulverton to Tarr Steps. 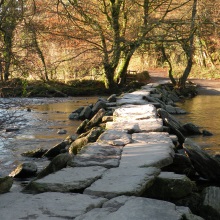 Tarr Steps is a 17 span clapper bridge (Tarr Steps is an example of a 'clapper' bridge (the term being derived from the Latin 'claperius', meaning 'pile of stones') and is constructed entirely from large stone slabs and boulders.), the longest of its kind in Britain. It was first mentioned in Tudor times but may be much older. The river has silted up over the last century and often now comes over the stones in times of flood. The bridge has had to be repaired several times as stones of up to two tonnes have been washed up to 50 metres downstream.

The name 'Tarr' is thought to be derived from the Celtic word 'tochar', meaning 'causeway'.

It's only because the local sedimentary rocks form such suitable slabs that it was built at all. At 59yds (54m), Tarr Steps is by far the longest of the 40 or so clapper bridges left in Britain. You can find more detail on the Tarr Steps page of the Exmoor Historic Environment Record. (Opens in new window) 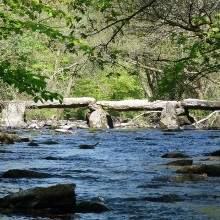 The Work of the Devil

Folklore gives a different origin for the bridge, however, saying that the Devil himself built the bridge, and that he promised to kill anyone who attempted to cross. A cat was sent across and the local people saw it vaporised before their very eyes, and so then the local parson was sent over. He met with the Devil at the midway point of the bridge, and stood firm before the demon, despite being sworn at and shouted at. The Devil eventually conceded, allowing the people to cross his bridge. He did add one stipulation however - that people would still be banned from the bridge in the event of him choosing to sunbathe there - and that stipulation stands to this very day.

More than just the bridge

Listen to our Woodland Expert Graeme talking about Tarr Steps and the important woodland that surrounds it .